I love reading.  It's as simple as that.

The Ghost and The Graveyard - Genevieve Jack 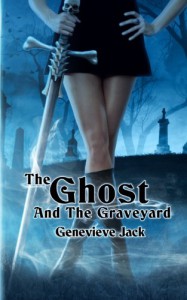 The Ghost and The Graveyard (Knight Games 1) is about Grateful Knight (yeah I totally hated the name at first too but then liked it as it made perfect after I'd finished reading the story) who after a horrible breakup in which her ex pretty much drains her bank account and forces her to start all over ends up moving into an old house owned by her dad. It's a bit out of town, pretty much by itself and would be the perfect place to start over except for the gigantic graveyard which surrounds it. After nearly wrecking her car at the first sight of a really hot guy she finds out that his name is Rick and he is the cemetery caretaker and she feels an instant connection to him (no, not one of those types of connections but a real one based off of memories that keep popping up in her head of him - memories she doesn't quite understand) She settles into her house, working on her self esteem and saving her money up to move (the cemetery totally creeps her out) and things should pretty much be getting back to normal for her by now except they're anything but. She soon comes to learn that her house is haunted by several ghosts, one of who is Logan, another sexy guy....er ghost with his own dark secrets. Soon sparks fly between Grateful, Logan and Rick. She feels bound to Rick by forces greater than herself plus she thinks he's totally hot but Logan is the perfect roommate. He cooks, he cleans and he's pretty much quite as a ghost most of the time. There's only one problem. Neither Rick nor Logan seem to care for the other. Both tell her not to trust the other guy and as more and more weird events start to happen around the cemetery and dark forces from an ancient evil make themselves known Grateful finds out more than she ever bargained for. Will she be up to the challenge? Who will she choose? The Ghost or the Graveyard? You'll have to read to find out!

I got this one for free and read it a while back and I have to say I really enjoyed it. The Ghost and the Graveyard takes the same old thing: witches, vampires, demons and good vs. evil yet manages to put a brand new twist on them. Most of the story takes place around Grateful's new house and the cemetery that surrounds it but there's plenty going on. Basically it was just a fun read, not too heavy nor too light. Not too serious yet serious enough. Not too sexy yet plenty sexy. The book rode a good middle ground for me and I'm looking forward to the next one in the series. I really wasn't sure if I was going to like this one and quite a few reviews seemed to not care much for the ending but I didn't feel that it really left everything in the air. The book had a self contained story yet left more for later. It wasn't near as bad as some books I've read that felt more like a prequel than an actual book and just stops right when things are getting good. Sure things are still a bit open and there is more to come but the major storyline wrapped up nicely and I felt it had the proper ending. I'd very much recommend reading this one. Heck, it's free so if you don't like it then no harm done but chances are if you're looking for a bit of the supernatural with a different twist to them then you'll find this book a refreshing change. I know I did. Give it a shot, sit back and have some fun.